New York City is a captivating, awesome, and glamorous empire. There are countless museums, theaters, restaurants, parks and towering skyscrapers. It is a shopping capital of the world. In midtown Manhattan are most of the designer boutiques; Fifth and Madison Avenues are locations of such world-renowned department stores as Bergdorf Goodman, Lord & Taylor and Saks Fifth Avenue. FAO Schwartz is one of the largest toy stores in the world. New York is also a world-class culinary experience - with pockets of ethnic restaurants: Chinatown, Little Italy, Little India and Little Brazil. The famous Statue of Liberty sculpture symbolizing the American Dream can be reached by ferry from Battery Park. Once the first stop for over 12 million immigrants, Ellis Island now houses the Museum of Immigration, including the American Immigrant Wall of Honor. The Art Deco Empire State Building is one of the world's best-loved skyscrapers with two observation decks. Also take time to visit the Chrysler Building, Radio City Music Hall, and St. Patrick’s Cathedral.

The Upper East and Upper West: Tales of Money and Scandal

The Life of Alexander Hamilton

The Floor is Yours at Madison Square Garden

The Origins of NYC Sightseeing Program

The history and bricklaid beauty of Boston is easy to enjoy. Follow the Freedom Trail past Old North Church, Paul Revere Park, Fanieul Hall, the Commons, Old Ironsides and more landmarks of America's birth. Across the Charles River is Cambridge and Harvard. Venture to Marblehead and Salem to the south, or Lexington and Concord to the north. Back in town, have clam chowder at the warf or great Italian food in North End.

Drawn by the pines, granite shores, fresh lobster and stunning views from Cadillac Mountain, captains of industry once kept summer homes here. The charming little town, and all the rest, remain. And the rocky boulder beaches on its shoreline are now Acadia National Park, a preserved expanse of vintage Down East scenery.

Halifax is Atlantic Canada’s center of business, research and education. Strong emphasis is placed on cultural diversity, historic restorations and the preservation of heritage and culture. The Halifax Citadel Fortress dominates downtown Halifax. Take a stroll along the waterfront past restored buildings and warehouses of Historic Properties, or a walk in delightful Public Gardens, the oldest Victorian gardens in North America. Halifax’s sister city of Dartmouth lies on the opposite shore and is reached via the oldest saltwater ferry in North America. The spectacular view of Halifax harbor makes the trip worthwhile. Housed in former Dominion Building, the Art Gallery of Nova Scotia features Nova Scotia folk art and maritime artists. A two-hour walk will easily show you the major highlights of historic and scenic Halifax. Visit Historic Properties, St. Paul’s Church and Province House, the latter two being the oldest buildings in the city. Granite Springs is rated one of the finest 18-hole golf courses in Atlantic Canada.

Sydney is located on Cape Breton Island on the east side of the Sydney River. Sydney has a strong ethnic population. As the only significantly industrialized district in Atlantic Canada, Sydney is the heart of Nova Scotia’s second-largest urban cluster. The city’s central business district impresses with the variety of products and services offered by downtown merchants. The town has become an important gateway to the scenic and historic attractions of Cape Breton Highlands and for cruising on the Bras d’Or Lakes. On the city outskirts is Fortress Louisbourg National Park, presenting Canada’s largest historical reconstruction. Here visitors can enjoy a town perfectly restored to its 1740 appearance. A walk on the half-mile Boardwalk promenade in the heart of downtown provides a panoramic view of the harbor. Apart from Louisbourg Fortress, the town also features a railway museum at the Sydney and Louisbourg Historical Society and the Atlantic Statiquarium, a marine museum devoted largely to underwater treasure.

The City of Corner Brook - in Canada's Newfoundland and Labrador province - is nestled among the Long Range Mountains, which are a continuation of the Appalachian Mountain belt, stretching up from Georgia in the southern United States. Theatre and art are alive in Corner Brook. Corner Brook is Newfoundland and Labrador's "Host City" and is ideally positioned to host major sporting events. Experience picturesquesque Corner Brook from many groomed walking trails or visit the Captain James Cook Monument and bask in the glory of the sun setting over the Bay of Islands. Step back in time at the Corner Brook Museum and Archives or the Railway Society of Newfoundland Historic Train Site. Explore the downtown area and discover unique gifts and crafts and dine out in one of the City's many fine restaurants. Take a scenic drive along the coast of the Bay of Islands or have a more extreme adventure in Gros Morne National Park, just one hour away.

St Pierre is the southernmost island of the territory of St Pierre and Miquelon situated in the North Atlantic Ocean south of the coast of Newfoundland. It is a French protectorate consisting of two small groups of islands principally St Pierre, Miquelon, and Langlade. The islands are mostly barren and rocky but are important for cod-fishing.

St. John's, a classic harbor city, is capital of Newfoundland. Old accents and customs are common, yet Saint John is still modern. The city recently celebrated its 500th anniversary as a modern city with preserved heritage and culture. It offers old world charm, unique architectural and historic landmarks, fine cuisine and many other attractions. Historic downtown features unique sites, such as Cabot Tower on Signal Hill overlooking the harbor and the city. The famous friendliness, hospitality and charm of the people of Saint John, plus the Newfoundland folk music found in many of the lively waterfront bars, ensure a perfect visit. A 3 mile Rennies River Trail cuts through the city along a wooded stream and ends at the only public fluvarium in North America, where in late October/early November one can observe spawning brown and brook trout in their natural habitat through underwater windows. The Bowring Victorian park was donated by the wealthy Bowring family in 1911, and resembles the parks of London after which is was modeled.

Nuuk was founded by the unfailingly optimistic Hans Egede - the Danish missionary with soul-conversions on his mind - who promptly named the settlement Good Hope. Today Nuuk is small by modern standards, with a total population of only 14,000. Despite a wealth of land and a paucity of people, Nuuk has insisted on housing the population in immense apartment blocks with imaginative names like Blok P - a kind of Gulag on ice - and the urban sprawl is now spreading out along the road to the airport. Kolonihavnen is a pleasant exception to the rest of Nuuk's Lego-city look: it's a picturesque 18th-century fishing village in the heart of Nuuk and gives some idea of what the town looked like before the industrial harbour was built. Nuuk's real attraction lies in its proximity to any number of excellent day hikes into the hinterland and the fabulous views from the tops of the nearby mountains. Organised tours, boat trips and the rental of equipment is easier from the capital.

Built along the base of the Kuannersooq Fjord, the maritime town of Paamiut is highlighted by scenic architecture and old shops, stables and the old church. White tailed eagles flock to Paamiut en masse, and in the surrounding sea, you may catch sight of whales - orcas and humpback among many others.

This narrow 70-mile-long channel across the southernmost tip of Greenland is breathtakingly dramatic. Huge glaciers tumble down towards the rugged coast from the Greenland ice cap-exactly the kind of scene that inspired one Greenlandic poet to declare: 'I get dizzy of all this beauty'. A thousand years ago, just north of here at Narsarsuaq, Eric the Red established his farm amid 6,000-foot mountains and glaciers.

The town of Isafjord is a bona fide hive of industry. This busy fishing port runs to sizable shipyards as well as shrimp and fish factories— all ready to handle the catch of the day from the icy waters of the Denmark Strait. Recreational activities around here include hiking, kayaking, and of course, fishing.

The fire, frost and water symbolized by the red, white and blue of Iceland’s flag are manifested in this land. Reykjavik, or Smoky Bay, was so named in 874 A.D. by Ingolf Arnarson when he sighted the numerous hot springs on the Seltjarnarnes Peninsula. Today this remarkably pollution-free city is wrapped around a sweeping bay and has managed to retain its charming Old-World atmosphere. A pastiche of red-blue-and green-roofed houses together with the tall gray tower of Hallgrim’s Church dominate the skyline. In Old Town, many of the wooden buildings have been lovingly restored and stand side by side with modern timber and concrete structures. There are fine museums and art galleries; historic pubs present activity in late afternoon. The beautiful countryside outside of Reykjavik includes such natural wonders as volcanoes, geysers, glaciers, mountains and spectacular waterfalls.

Super-jeep safari to the glacier cave and snowmobiling

The fire, frost and water symbolized by the red, white and blue of Iceland’s flag are manifested in this land. Reykjavik, or Smoky Bay, was so named in 874 A.D. by Ingolf Arnarson when he sighted the numerous hot springs on the Seltjarnarnes Peninsula. Today this remarkably pollution-free city is wrapped around a sweeping bay and has managed to retain its charming Old-World atmosphere. A pastiche of red-blue-and green-roofed houses together with the tall gray tower of Hallgrim’s Church dominate the skyline. In Old Town, many of the wooden buildings have been lovingly restored and stand side by side with modern timber and concrete structures. There are fine museums and art galleries; historic pubs present activity in late afternoon. The beautiful countryside outside of Reykjavik includes such natural wonders as volcanoes, geysers, glaciers, mountains and spectacular waterfalls.

Super-jeep safari to the glacier cave and snowmobiling 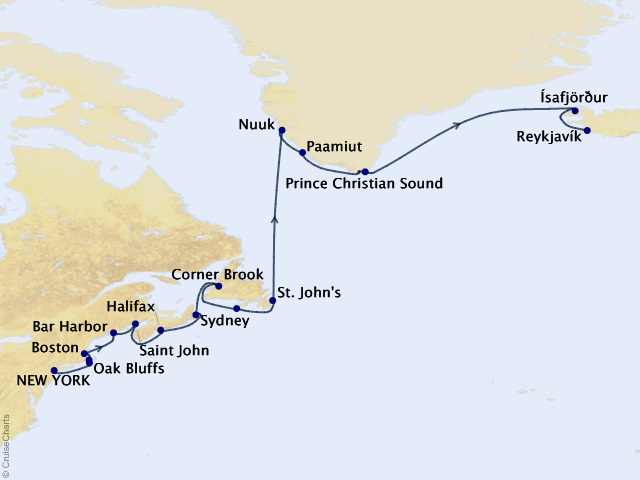 Fares are in US dollars, cruise only, per person, based on double occupancy and include fees/taxes. Price does not include airfare, transfers and airline government fees and taxes.

*Fares subject to increase. All fares and offers are per person in U.S. dollars, valid for residents of U.S. and Canada, based on double occupancy for new bookings only and may be changed or withdrawn at any time. Not all promotions are combinable. 2-f

All prices per person and in USD unless otherwise stated.