*Amenities may not be combinable with all fares shown. Additional restrictions may apply.

Have It All Package Available for Purchase – Includes Shore Excursion(s), Drink Package, Specialty Dining, and Wi-Fi

One of Asia's great economic successes, Singapore has fused diverse cultures into one dynamic nation.
Behind high-tech industries and high-rise buildings lives a society with an ingrained sense of conservative Confucian values. Beneath the westernized modernity beats a totally Asian heart. Strong beliefs center around extended families, filial piety, discipline, respect and Asian work ethics. Singapore’s name, meaning "Lion City," can be traced to the 13th century, and today there is the mythical Merlion, half-lion, half-fish, standing guard at the mouth of the Singapore River as the symbol of Singapore. A recent advertising campaign billed Singapore as "A Fine City."

A Vespa Tour at Kampong Glam

Laem Chabang is a city of color and contrast, you'll be awestruck by the kaleidoscope of sights and sounds.

At your Leisure in Bangkok (Car & Driver Only)

Laem Chabang is a city of color and contrast, you'll be awestruck by the kaleidoscope of sights and sounds.

At your Leisure in Bangkok (Car & Driver Only)

Sihanoukville (also called Kompong Som / Kampong Saom) is Cambodia's only port and is rimmed by four beaches: Ochheuteal, Sokha, Independence and Victory. The town is the perfect spot for fishing or diving. Visit the nearby waterfall or Ream National Park, a great day's adventure. The sleepy colonial town of Kampot isn't too far away, with the intriguing ghost town Kep also nearby.

The atmosphere of this city, known as the "Pearl of the Orient," is warm and energetic. Tourists usually choose to wander the busy streets of the Chinatown district, experience the Vietnamese art of water puppetry or visit the Reunification Hall. Other highlights are the former American Embassy, the Rex Hotel and the War Museum.

The main attractions of the coastal town of Nha Trang’s are its white sandy beaches, deserted islands and backdrop of rolling, verdant mountains. It is quite possibly Vietnam’s closest answer to a developed tropical resort. The Nha Trang area offers the best year-round weather in Vietnam; its clear waters and four miles of clean, uncrowded beaches encourage swimming, scuba diving and snorkeling. For now you can enjoy a relaxed seaside resort town, with a lively market, wide streets and uncrowded beaches.

Da Nang is on the threshold of becoming a major destination for tourists from Europe, Australia and the United States, thanks to some unique attractions, spectacular scenery and the friendliness of the locals. The French influence is evident in Da Nang's provincial character which dates back to the 19th century, with later history wrought by war. It was here on the coast that the first U.S. combat troops landed on March 8, 1965. As the war progressed, Da Nang’s runway was expanded to become the largest in all of Southeast Asia. Da Nang fell to the Viet Cong in March 1975; this signified South Vietnam's defeat in the war. Among the city's numerous attractions is the much-touted Cham Museum, housing close to 300 Cham sculptures. Here history lovers get a glimpse into a very powerful era of Vietnam's past. Da Nang, however, may be most familiar to Americans who watched the movie Good Morning Vietnam and the popular television series China Beach - which immortalized a popular R&R GI resort of the Vietnam War.

Meaning “Bay of the Descending Dragon,” Halong Bay’s water is calm and undisturbed despite the jutting limestone mountains that soar out of the water and toward the sky. As if a tail of a Dragon plunged into the earth, the mountains are craggy, sharp, and barren, and are dotted with thousands of small caves of various depths and heights. At dusk, they all take on mysterious shades of gray, mauve and olive, lending credence to the local legends.

As Asia’s premier gateway to China and Southeast Asia, Hong Kong offers a great travel experience. Visitors will find everything from hiking, horse racing and sailing to internationally renowned art galleries and lively art festivals. Some of the best hotels, dining and shopping in the world are found in this metropolis. Hong Kong is one of the world’s great cities and a delightful realm of natural wonders and serene rural villages. With its wealth of cultural attractions, Hong Kong invites exploration and inspires interest to even the most experienced traveler. Sights include Museum of History – which houses a collection of archaeological finds and historic photographs providing an introduction to Hong Kong’s history. Cultural Center is the city’s newest performing arts venue. The Space Museum’s dome, where Omnimax shows and astronomy exhibits are featured, is nearby. Adjacent is the Museum of Art. Stanley Market is an open-air market for browsing and finding bargains in fashions, leather, porcelain, and linens. Jade Market is a specialty market featuring 450 stalls with jade items. 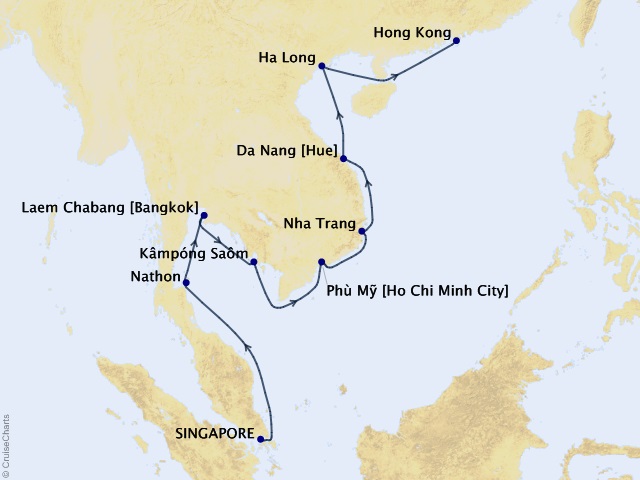 Rates are cruise only, per person, based on double occupancy. Taxes, Fees and Port Expenses additional for all guests. Fuel surcharges may apply. Please ask your travel counselor for details. Rates are subject to availability and may change without notice. Restrictions may apply.

Prices are per person, based on double occupancy. Airfare, transfers, Taxes, Fees and Port Expenses additional.

All fares are quoted in US Dollars.

All prices per person and in USD unless otherwise stated.
Offer ID:
1462908